From the Left-Right Spectrum Depiction to the Engineered Systems View

The left-right spectrum depiction of society is oversimplified and misleading. In this view, the only decision for citizens and leaders to make is how big a government. Real large-scale systems are characterized by many factors, not just one.  Reducing everything to “left versus right” throws away lots of useful information and discourages learning more.

Of course, there is no conservative or liberal way to set up welding machines. Yet, welding machines are clearly much simpler than national economies. We suggest that if the public thought about national decision-making more as we think about arc welding machines, we would get better outcomes. Also, the public would see much more value in learning about the facts relating to the operation of the national system and subsystems.

In Industrial Engineering and Operations Research (IEOR), we often advise customers about how to use data and modeling to improve their outcomes.  Using the systems view to represent national economies is a major step forward as compared with the left-right spectrum.  Commonly, we use the “systems view” in which there are many inputs or decision variables and many outputs or system responses (Figure 1).  Even for a welding machine, the control panel consists of more than just one left-right slider switch.

Determining the control settings for an engineered system involves system optimization of the associated inputs. These inputs may interact, as indicated in Figure 2. In the example, the effect of changing input x1 depends on the value of input x3. This non-parallelism is an “interaction” effect. With many possible decision variables or factors and interactions, the situation might seem daunting. Yet, Industrial Engineers and Operations Researchers (IEOR) commonly solve problems with billions of decision variables as in vehicle routing or hundreds as in voting machine allocation. 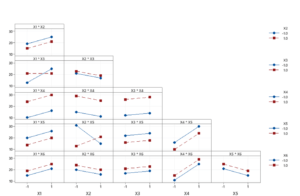 Figure 2. Example interaction plot showing how the inputs or knobs sometimes conspire to change the conditional effects on a system response. The response could be national Gross Domestic Product, happiness, or life expectancy.

You might say that large scale systems are too complicated for useful model-based system optimization. That is at least partly false. Several private companies and research groups have been creating prescriptive large-scale macroeconomic models and advising governments.  Having a public still limited by the left-right spectrum metaphor is a serious constraint on possible ways to make the world better. This explains part of the importance of the role of adult education companies such as factSpread.